This tour combines two features of Belgium: you can barely see it on a map, but it’s home to the world’s best beers. The former made it possible to discover the latter by bike. A total of 214 km took us past seven breweries, sampling over 25 different Belgian Beers in four days. 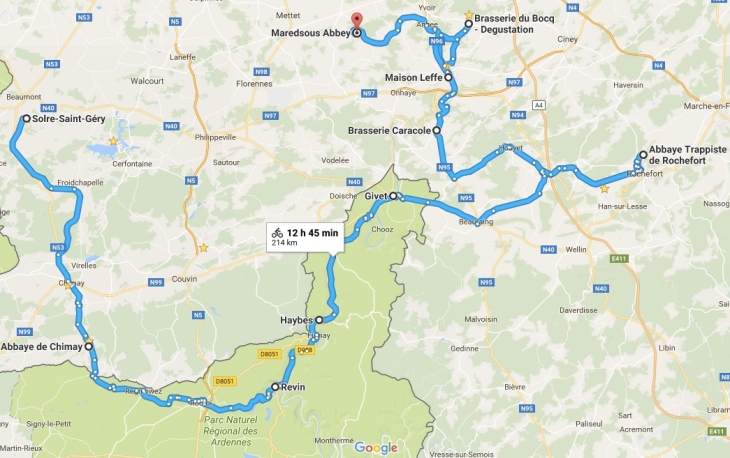 The southern part of Belgium is known for both its rich nature and poor bike infrastructure. Add the hilly landscape and the high alcohol percentage of Belgian beers, and one can guess we embarked on quite an adventure. Wallonia has some beautiful bike routes, which are part of the RAVeL biking network. These routes are well-marked and isolated from any car traffic, but far from widespread. For most of the tour, we had to pray that Google Maps identified a bike-friendly route and didn’t try to send us on the highway.

Our starting point was Solre-Saint-Géry, a small town in the Belgian province of Hainaut. We stayed the previous night at my friend’s grandmother’s house, so we could have an early start. After a delicious homemade breakfast, we were as ready as we’d ever be! 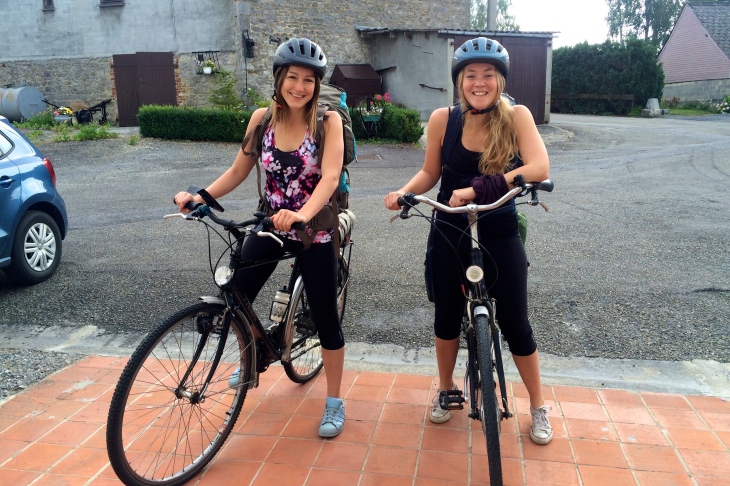 Solre-Saint-Géry is located on the RAVeL 109/2, a beautiful green route that goes all the way to Chimay. By the time we made it to our first stop two and half hours later, we had come to realize two things: 1. Google Maps tends to be very optimistic timewise; and 2. the only type of flat in this region is false flat. The best way to deal with these realizations was a degustation platter of Chimay. Each. Plus our favorite Chimay in full-size. 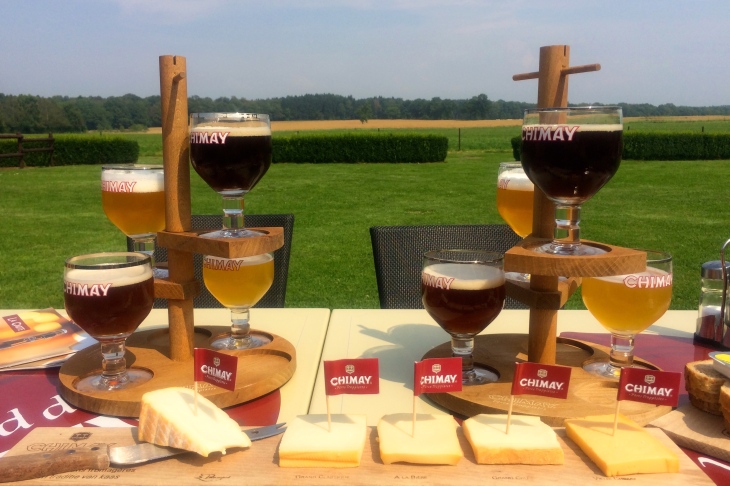 Chimay is one out of six Trappist beers brewed in Belgium. Espace Chimay includes an exposition on the history and making of Chimay beers, as well as a nice brasserie where the beers and cheeses can be sampled outside. Chimay is brewed at the Abbaye Notre Dame de Scourmont, which is located a bit further down the road from Espace Chimay. The abbey can be visited, but the brewery is closed to the public. 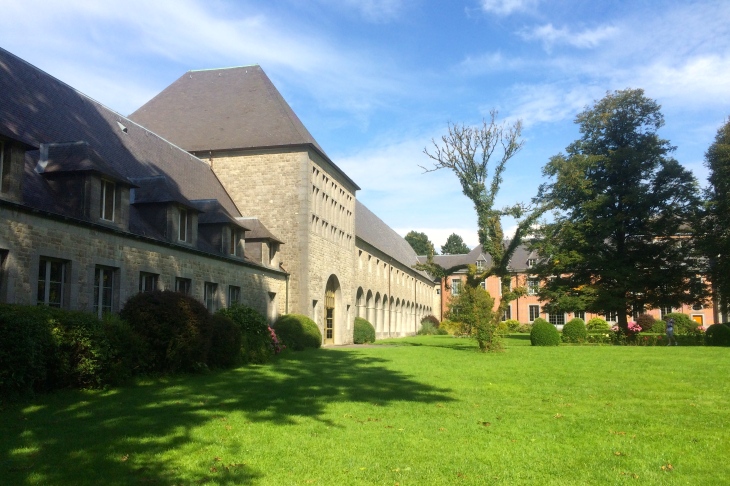 What we needed after this boozy three-hour break was a nicely mapped out RAVeL; what we got was Google Maps sending us down a road that didn’t exist, without giving an alternative. After a lot of circling around in despair, we found a road that seemed to go in the same direction of the non-existent one. By the time we realized it was ment for tractors and not bikes, we’d already descended way too much to turn around. On the upside, the Chimay made us brave enough to turn a city bike into a mountain bike and reach the end of the road. On the downside, we ended up without cell phone battery and not the slightest clue of where the road had taken us. When we begged the only soul in sight to let us into her house and charge our phones, we found out that we were in France. We took off praying that the two remaining biking hours would be less eventful.

We set up our tent at campsite Les Bateaux in Revin, a French town on the banks of the Meuse river. On the hunt for a proper meal, we found restaurant La Bonne Source. After a very tasty and surprisingly cheap dinner on the patio, we had just the amount of energy left to take a shower and dive into our tent.

In daylight, Revin turned out to be a charming French village. I got pains au chocolat and a baguette from a little bakery, which gave me an instant holiday feeling! After a stop by the butchers to complete our picnic, we were ready for day two. Our butts not so much.

The Voie Verte Trans-Ardennes took us along the Meuse for a beautiful and happy ride, without hills or coordination problems. We made a pit-stop in Haybes, trying the interesting beers from microbrewery Le Clos Belle Rose. 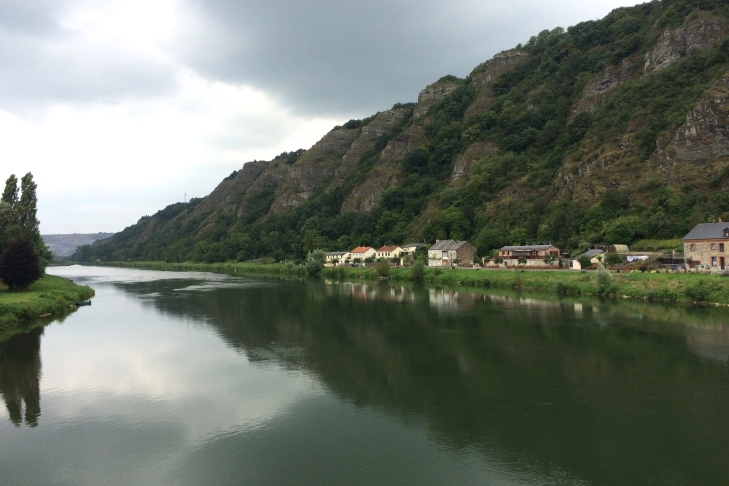 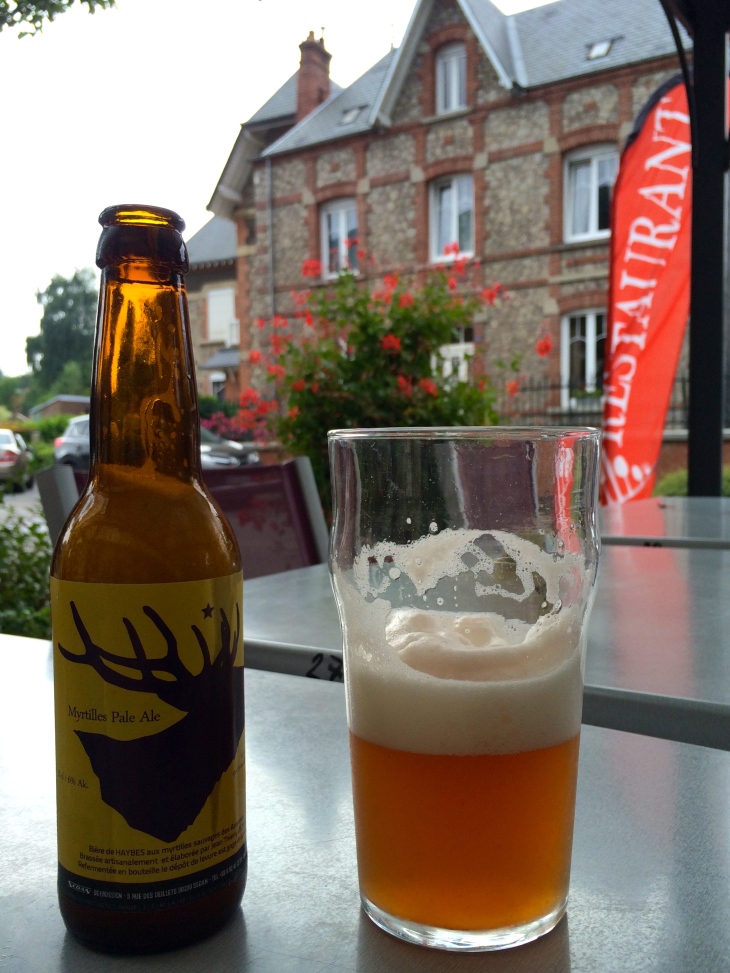 The relaxing ride lasted about two hours, until we started to climb our way back to Belgium. At the time we entered the Belgian province of Namur, we could hear the trucks whizzing by as we were making our way uphill. Bike paths were nowhere to be seen, the climbing never seemed to come to an end, and on top of that Google Maps tried to send us onto a highway. Needless to say we were ecstatic when we finally reached the RAVeL 150/B, which took us off the road into the forest. We enjoyed our well-deserved picnic at a terrace hidden in the woods, paired with a refreshing Wittekerke Rosé. 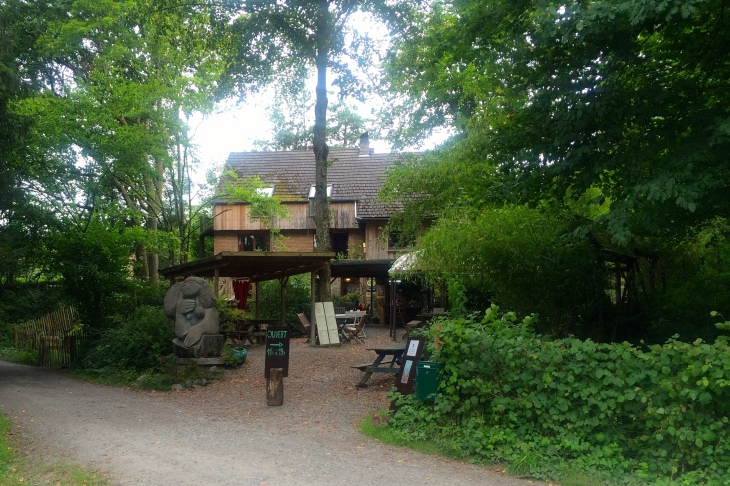 We ended today’s biking the way we started it, with an easy and beautiful ride along the Lesse. The trail took us straight to Rochefort, where we put up our tent at Campsite Les Roches. Rochefort is home to another Belgian Trappist beer, that comes in three varieties and strengths. We set out to discover all three of them in town. Restaurant La Gourmandise gave us the complete experience, including a homemade burger with Rochefort cheese and a Rochefort 10. With 33 cl at 11.3º alcohol, this served as a triple nightcap! 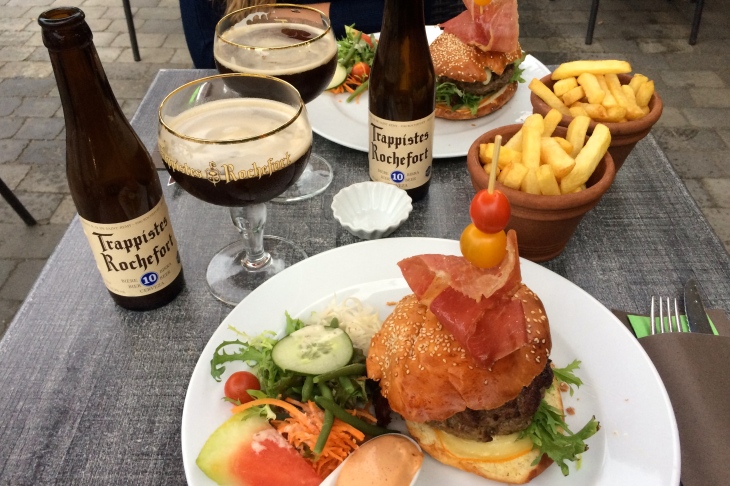 Day 3 started much more adventurous than we had in mind. After breakfast offered by our much better equipped camping neighbors, we took off on a small detour to the Abbey of Notre-Dame de Saint-Rémy. The home of Rochefort beers is located at the edge of a forest. The abbey and brewery are closed to the public, but you can buy beers directly from the monks. It should have been an easy and short ride from Rochefort town, yet we managed to take the hiking path instead of the biking path. So again we found ourselves mountain biking, trying to exit the forest in one piece. We must have looked pretty worn-out when we finally knocked on the door of the abbey, because the monk offered us two beers for free. 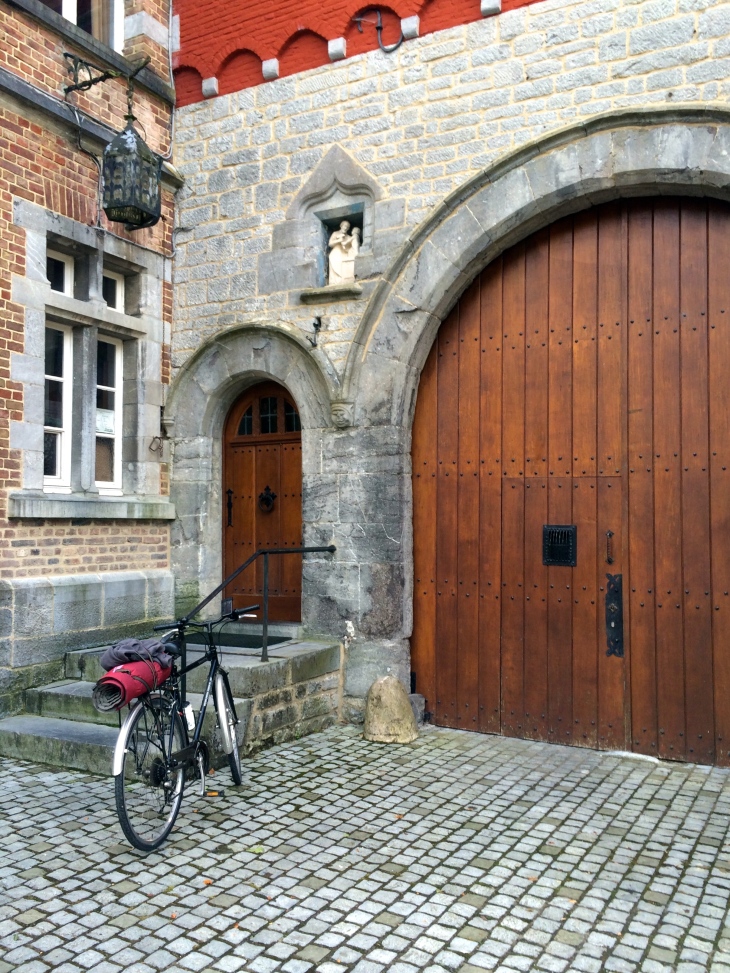 After this detour, we returned to the RAVeL 150/B with destination Houyet. We had already biked along part of this route yesterday, but since it was so pleasant we didn’t mind. We enjoyed our holy gift while taking in the peaceful and green environment. In Houyet, the RAVeL ended and we continued back onto normal roads. There was a lot of climbing involved, but luckily the roads where much more quiet as compared to yesterday’s. 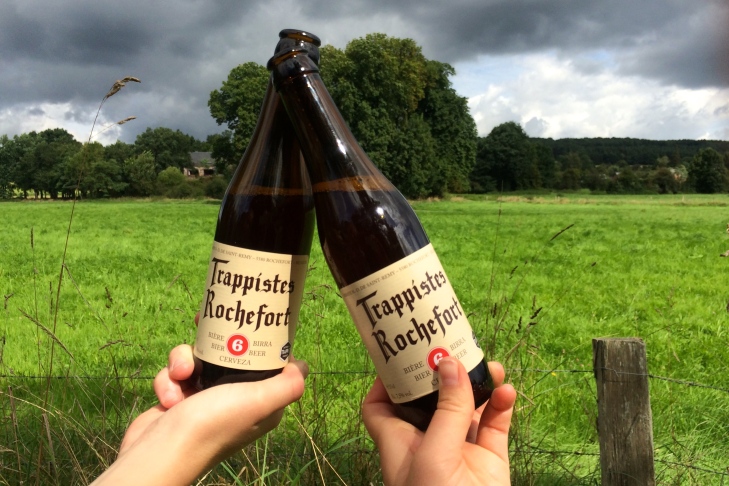 All the climbing was rewarded with beer from Brasserie Caracole. Beer is still brewed the artisanal way in this authentic microbrewery. You can learn about the brewing process with a guide, or choose to jump directly to the tasting process like us. I really enjoyed their beers, most of which I had never tasted before. The tasting room feels very medieval and cozy, so it was with a heavy heart that we left for more biking (and beers).

From here it was all downhill to Dinant. We couldn’t really enjoy the breeze in our hair, as we suspected that we would need to climb back out of the valley to get to Brasserie du Bocq in Purnode. And we were right; a mere 7,5 km from Dinant, yet it felt like we were climbing for hours under the blazing sun. At this point, I started to get seriously upset with the landscape in Southern Belgium.

Brasserie du Bocq grew from a family-owned brewery to one of the largest independent breweries in Belgium. You can do a guided tour of the brewery and enjoy the beers on the sunny patio. 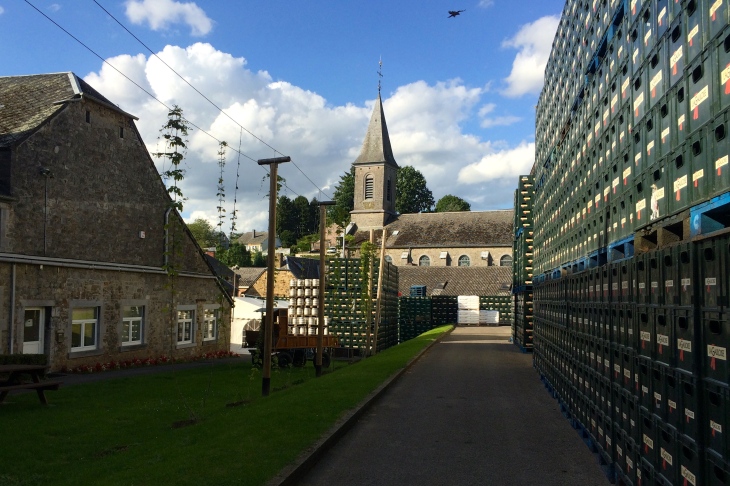 By the time we made it to the brewery, we were so exhausted and thirsty that we couldn’t move for the next couple of hours. During this time, we tried most of the beers on their extensive list. When we finally found the courage to get up and bike our way back to Dinant, one of the owners treated us to another round. This was the kiss of death for our Saturday night plans in Dinant. As it was late already, we decided to camp nearby at Camping du Bocq. From the moment we started the steep descent to the campsite, we knew this would hurt the next morning. 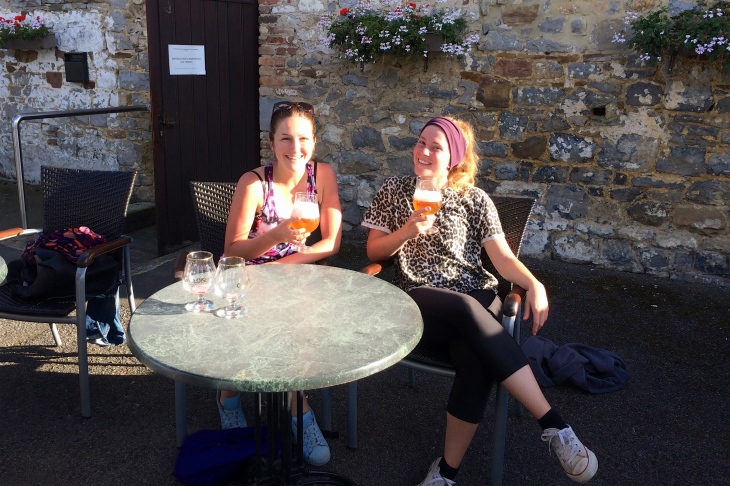 The last day of our biking trip could have started better. Not only did we have to climb our way back up, we had to do it in the pouring rain. We biked straight to a B&B in Dinant, where we treated ourselves to a breakfast of champions. 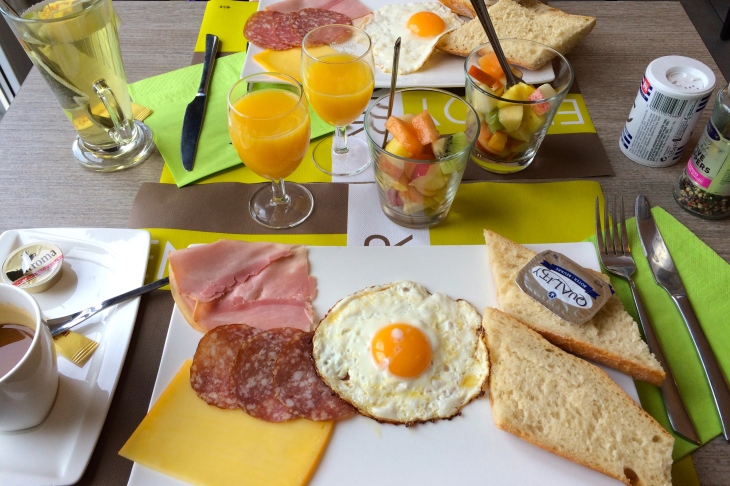 Dinant is home to the Abbaye Notre-Dame de Leffe, where Leffe beer was brewed until the abbey was destroyed during the French revolution. Nowadays Leffe is owned by AB InBev, but Maison Leffe in Dinant offers an interactive look into the history and brewing of Leffe. It goes without saying that this was followed by a tasting of Leffe beers. Some of these are seasonal or country-specific, and thus not available in any store. If that doesn’t lure you in, the restroom has a great view of Dinant. 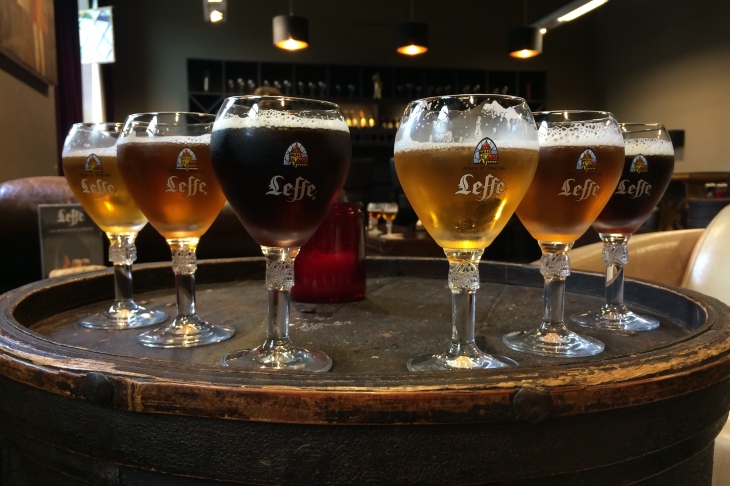 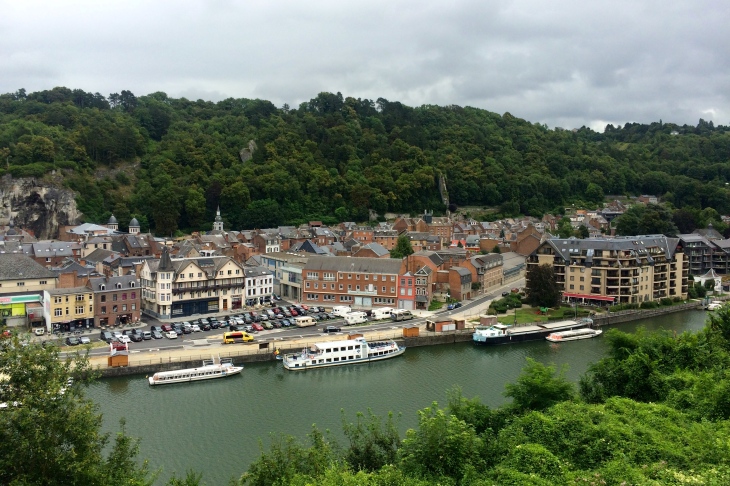 We got to bike our final episode along the RAVeL 150/A, which took us straight to the Abbaye de Maredsous. This is a nice flat trail that runs through the forest, but the rain and our sore butts complicated things. It felt like we couldn’t have biked much further without permanent damage, so we were very thankful to my parents for picking us up in Maredsous. Obviously we weren’t going home without tasting Maredsous beers, and most of all their delicious cheeses. 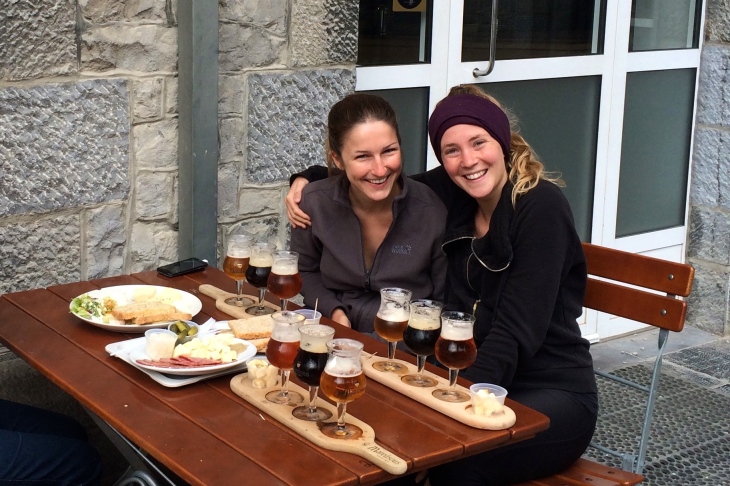 This was an amazing trip which I highly recommend to all beer and adventure lovers!