Cambodia and Vietnam make a great combo for a two-week trip in Southeast Asia. All you need is a small budget and a strong sense of adventure. This is my two-week budget itinerary for Cambodia and Vietnam, tried and tested by four novice backpackers.

Upon arriving in Phnom Penh, it’s easy to see why public transport is the way to go in Cambodia. From the comfort of a tuk tuk, soak up the chaos of bikes, cars and overloaded motorcycles.

If you do decide to rent a car in Cambodia or Vietnam, it will include a driver. Self driving is made practically impossible, and with good reason. Out of budgetary constraints and survival instinct, we relied on public transport for the majority of the trip. We did take two domestic flights in Vietnam, which turned out to be more challenging than the long sweaty bus rides.

Catch a tuk-tuk to Choeung Ek, located on the outskirts of Phnom Penh. During the bloody Khmer Rouge regime led by Pol Pot, it served as a mass killing site. On these Killing Fields, more then one million Cambodians were executed. Choeung Ek is now a memorial for all victims, educating visitors on Cambodia’s bloody history. Walking the grounds where so many children, men and women were killed leaves you speechless. It’s hard to believe that this genocide took place just 40 years ago. 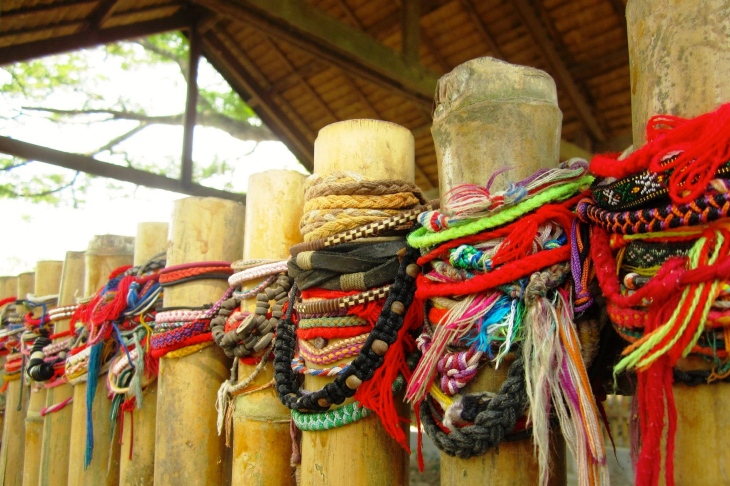 Spend the afternoon visiting Phnom Penh. Wat Phnom is known as the temple on the hill, guarded by pink lions. The Royal Palace is Phnom Penh’s other major landmark. For souvenirs and street food, head to Central Market. 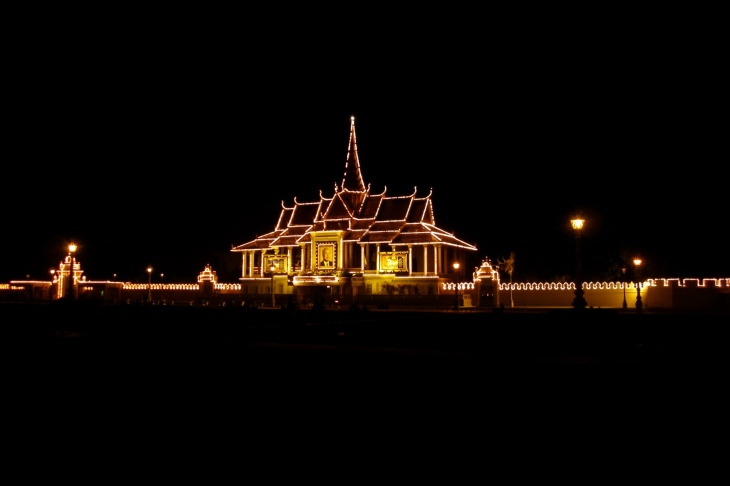 Take an early bus or taxi to Siem Reap, about a six-hour ride from Phnom Penh. Lounge by the pool in the afternoon, preparing for a busy day ahead. For dinner, try some traditional Khmer food served in banana leaves. Siem Reap counts several night markets that make for a good post-dinner stroll. Angkor Night Market has more than 200 stalls selling souvenirs, pushy vendors included.

The last day in Cambodia is spent exploring its most impressive sight. For centuries, the Angkor complex was the centre of the Khmer Kingdom. In addition to the famous Angkor Wat, there are many other beautiful temples to explore. Given the size of the site, transport on wheels is essential. You can book a private taxi or tuk tuk for the full day through your hotel. 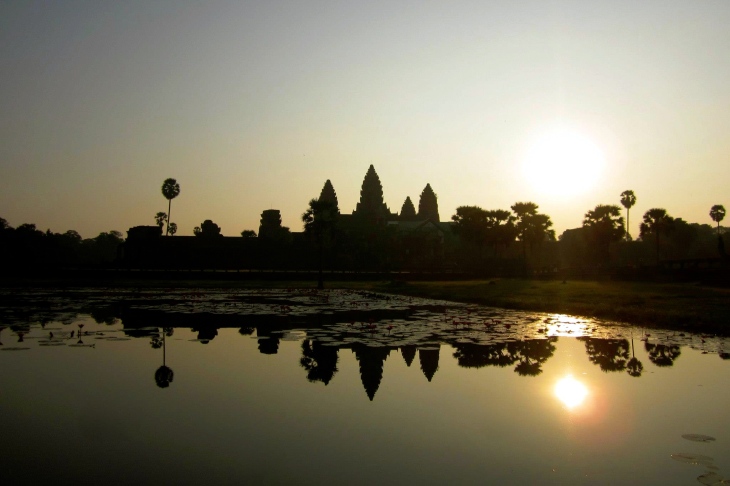 Plan to arrive at least half an hour before sunrise, as there are many early risers looking for the perfect spot. You can easily spend an entire morning wandering around Angkor Wat. In the afternoon, explore the other main temples: Bayon, Preah Khan and Ta Prohm. 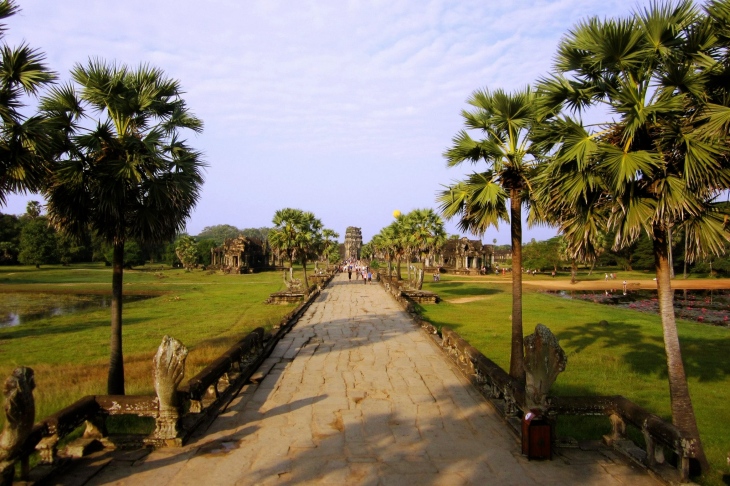 In the absence of cheap flights from Singapore to Siem Reap, we flew into Phnom Penh and took a bus to Siem Reap. This entailed a 15-hour bus ride from Siem Reap to our next stop, Ho Chi Minh. Even though the route is just under 300 miles, the bus takes it sweet time. When you think the bus is at full capacity, it starts picking up locals on the side of the road. Add to that random stops and a stressful border crossing, and you’re in for one hell of a ride.

If you are relying on public transport, fly into Siem Reap as a starting point. That way the visit to Phnom Penh cuts the dreadful ride between Siem Reap and Ho Chi Minh in half.

Set out on Vietnam’s maze of rivers, the Mekong Delta. More than half of the country’s rice and fish consumption stems from this region. A variety of day tours depart from Ho Chi Minh, all offering essentially the same thing. After a rough day on the road, we didn’t mind floating from one touristy stop to the next.

A basic Mekong Delta cruise takes you past fishing villages to small factories along the river. Here you can try local specialties such as coconut candy, honey tea and snake wine. This exotic drink is made up of rice wine infused with a whole snake, preferably venomous. We already fulfilled our sense of adventure the previous day and opted out. 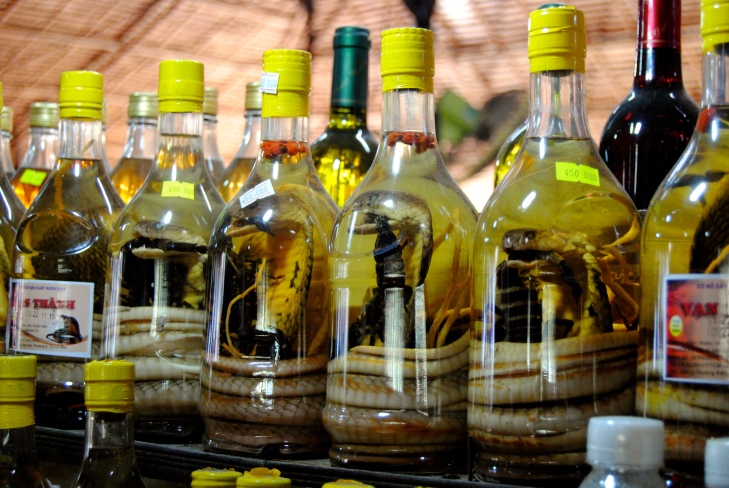 The Vietnam War is usually the first thing that comes to mind about this beautiful country. In the city of Ho Chi Minh, Vietnam’s war past is ever present. The Cu Chi Tunnels is an extensive underground network that was used by the communist guerrilla Viet Cong. Guided tours take you past cruel booby traps and through the tunnels. You can also shoot an AK-47 at the adjacent shooting range. 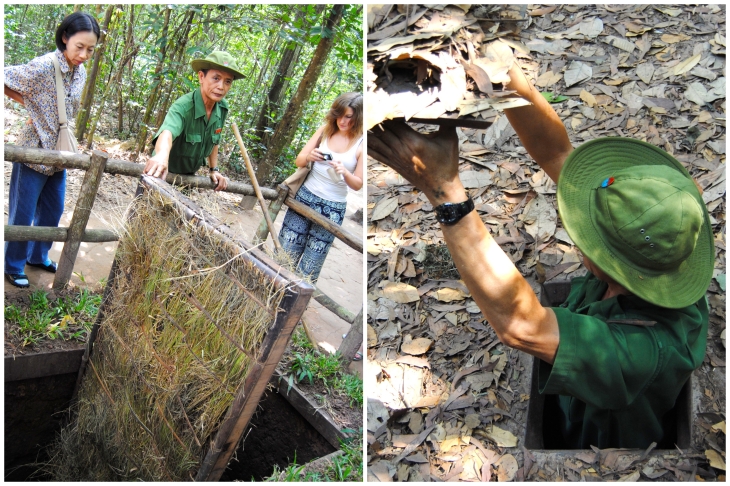 Complete the war history class with a visit to the War Remnants Museum. While often criticized for propaganda, it’s a must-visit to grasp the horrific impact of the Indochina and Vietnam wars on the Vietnamese people. Before the Indochina war, Saigon was the capital of the French Indochina colony. The legacy of France in Vietnam is undeniable, from Vietnamese baguette to the Notre Dame of Saigon. 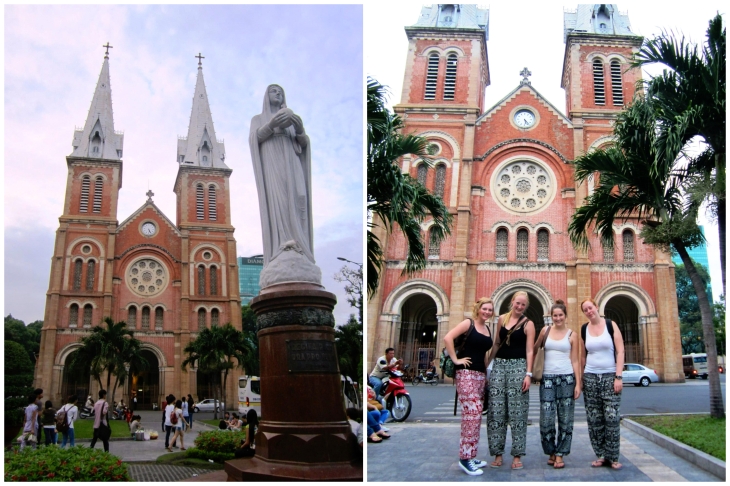 Take a domestic flight to Da Nang, a short drive from Hoi An. This might be more challenging than it sounds: we arrived at the airport to find out that our flight had been advanced by three hours and thus left already. The ancient town of Hoi An is UNESCO world heritage. Start your day with a visit to the central market. Filled with exotic produce, meat and fish, it’s a feast for the eyes.

For centuries, Hoi An was an important trading port. Although quite touristy, the town manages to keep its old-world charm. The yellow merchant buildings in the port now house bars and restaurants. Watch the boats come and go with a sweet happy hour deal.

Besides history and charm, Hoi An has another asset: white sandy beaches in close proximity. An Bang Beach is just a short bike ride from the ancient town. Spend the day  under a palapa, occasionally rehydrating at one of the cool beach bars.

If you have an extra day to spare, you can take the 2 PM scenic train from Hoi An to Hue. Explore Hue the following day and take an evening flight to Hanoi. We skipped Hue and headed straight to Hanoi. Whatever you decide, don’t leave Hoi An without a lantern. Colorful lanterns are the city’s symbol and light up the sky at night. If you’re tight on luggage space, you can launch one onto the water for good fortune. Plus you’ll make a little kid selling paper lanterns very happy.

Hanoi is the starting point for trips to Vietnam’s natural wonder, Ha Long Bay. The most accessible way to explore Ha Long Bay is on a cruise. We booked a two days, one night cruise which includes pick up and drop off at your hotel in Hanoi. Don’t expect a typical cruise ship; Ha Long Bay’s “junk boats” are Chinese sailing ships that house about 25 people.

The cruise takes you through the bay at a leisurely pace, making several stops along the way. Explore the Sun Sot Cave, hike to a panoramic view at Ti Top Island and kayak to a floating village. Nighttime comes early and is shared with tens of other boats lighting up the bay. 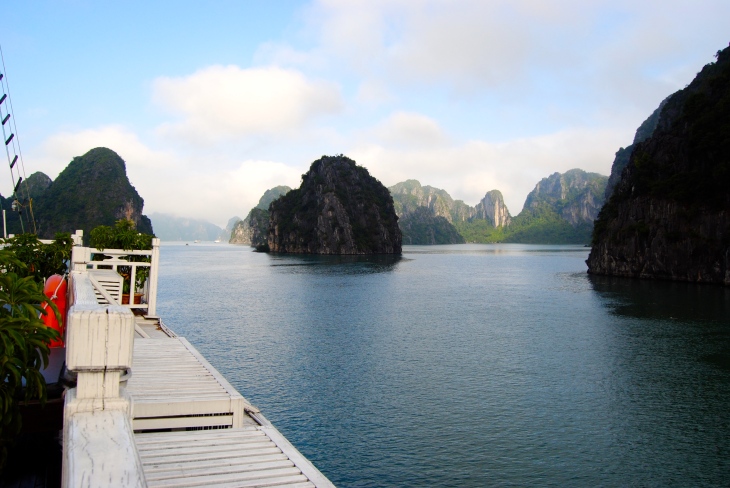 If you travel in winter, chances are high you’ll wake up to a foggy sky. Spend the morning relaxing on the deck before cruising back to the shore.

After sleeping on a boat, get ready to spend the night on a train. The minivan will transport you back to Hanoi well in time to catch a sleeper train to Lao Cai. Eight hours later, you’ll arrive fresh as a daisy in Vietnam’s scenic mountain region. 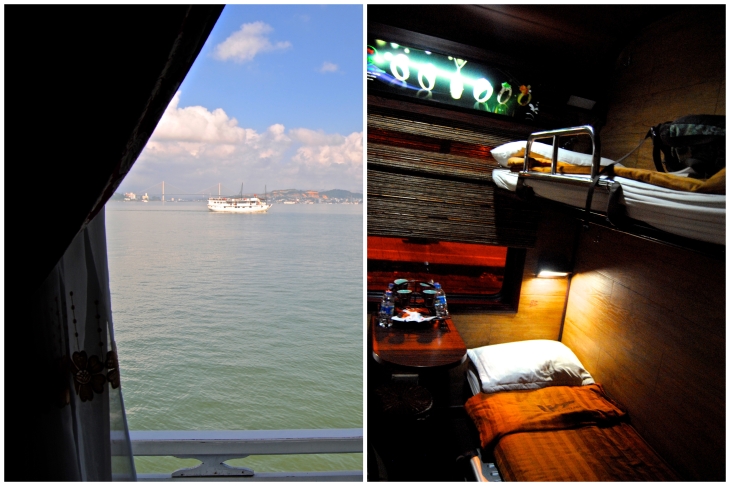 Between the train station in Lao Cai and the town of Sapa lie 30 miles of dangerous roads. Avoid traveling by bus and get a taxi instead. Keeping your breakfast inside is well worth the extra dollars. You’ll arrive in Sapa just in time to embark on a day tour or overnight trekking through the region. 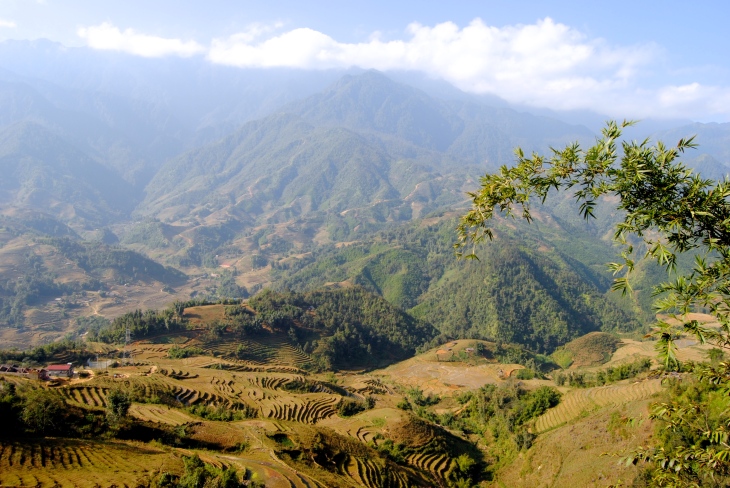 Our private guide for the day took us on an easy hike through the rice terrace fields. In addition to spectacular scenery, Sapa is home to several ethnic minorities. Most Sapa tours center around the rural life and traditions of these hill tribes.

Our stay in Sapa prepared us for a freezing return to Belgium, after six months in Southeast Asia. Elephant pants are in no way suited for Sapa’s cold winter weather, and neither are most homestays and hostels. Warm up on a walk to traditional Cat Cat Village, about two miles from Sapa.

Spend the afternoon in cosy Sapa. If you weren’t talked into buying souvenirs on the tour, you still have time to stock up in Sapa town. Take a taxi to Lao Cai train station and settle in your cabin for the night. The sleeper train will have you back in Hanoi by sunrise. 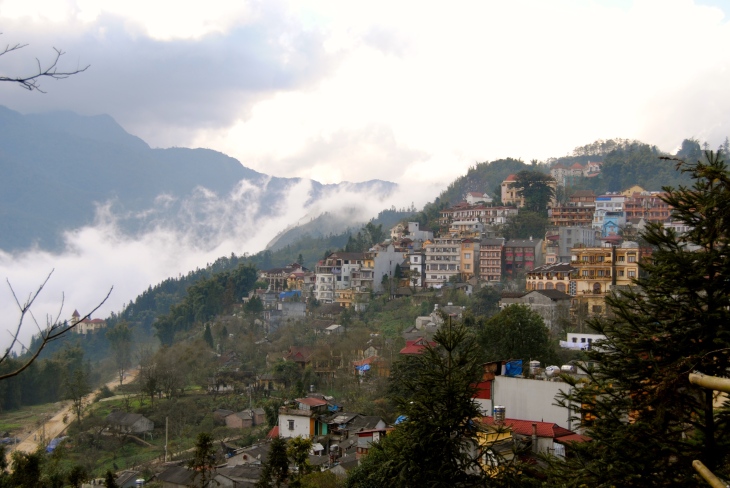 Explore Hanoi before heading to the airport. Wander through the chaotic Old Quarter and take a break at historic Hoàn Kiếm Lake. Under a foggy December sky, we focused on Hanoi’s extensive food and drink menu. The capital of Vietnam marks the end of this adventurous two-week Cambodia and Vietnam trip.